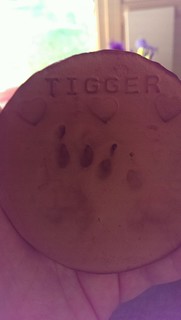 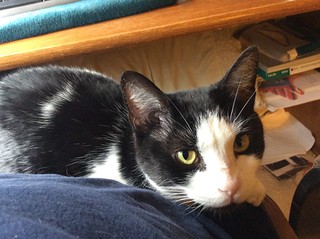 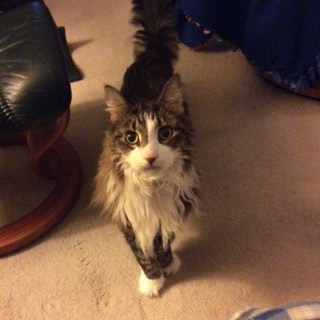 Yesterday Tigger had an ultrasound to see if he’d improved after the first round of treatment, and he’s doing great!

The masses in his intestines and in one kidney are gone, his lymph nodes are back to normal, and his other kidney is showing improvement. I feel like I can breathe again for the first time in two months.

Thank you for all your thoughts, and prayers, and healing vibes. Tigger purrs and kneads his paws in your direction.

I haven’t been able to post here in a while, because I’ve been dealing with something I never wanted to face. When we were on vacation last month, two days before we were scheduled to come home our cat sitter called and said, “There’s something not right with Tigger.” Of course we came home early, and after an absolutely wretched week we learned that he had lymphoma. Tigger, my baby, has cancer.

So we were preparing ourselves to say goodbye, and then the oncologist told us about a treatment with fairly good odds of remission and extension of life that is also financially feasible. So for the past month we’ve been taking Tigger in for chemotherapy, another word I never wanted to use to talk about my kitties.

From everything we can see, he seems to be responding well to treatment, and I celebrate all the little things that seem to signal things getting back to normal. (Mostly) including this.

On Saturday morning Tigger woke me up early, asking to be fed. Normally this would really irritate me, but now I’m so relieved that he’s eating again that I’m happy to oblige.

Once he was finished eating we went back to bed where I rubbed his belly until my arm felt like it was going to fall off, and then he came and laid down on my pillow. Even after losing some weight to this illness he’s still a pretty big cat, so I pretty much only had enough room to rest the crown of my head on the pillow but figured that, one, I was glad he wanted to snuggle, and two, I was already planning to go to the chiropractor that day, so it was fine.

As I was putting on my shoes my husband came out into the living room and said, “I feel obligated to tell you that I pulled a dingleberry off of Tigger.” (And I’ll just go ahead and tell you that if you reread this story, when you get to this sentence substitute “49% Honestly Felt You Should Know/51% Hoped To Provoke You Into An Entertaining Reaction***”.)

“Yes,” said my husband slowly, staring at me in anticipation of a responseÂ that I clearly wasn’t providing. Finally giving up he spelled it out for me: Â “That means that Tigger was sleeping on your head with a dingleberry.”

“Oh well,” I replied, completely unlike my usual OCD, germaphobe, refusing to use the dish towels in the kitchen to dry my hands because I can literally FEEL the germs leaping off the towel and crawling up my arms, self. “I need to wash my hair anyway.”

Because if the worst thing I had to deal with that day was poop, something that could be fixed with soap and water and did not require me to sit in the heart-wrenchingÂ Â waiting room of the emergency vet and hand over my baby for a scary-sounding treatment? 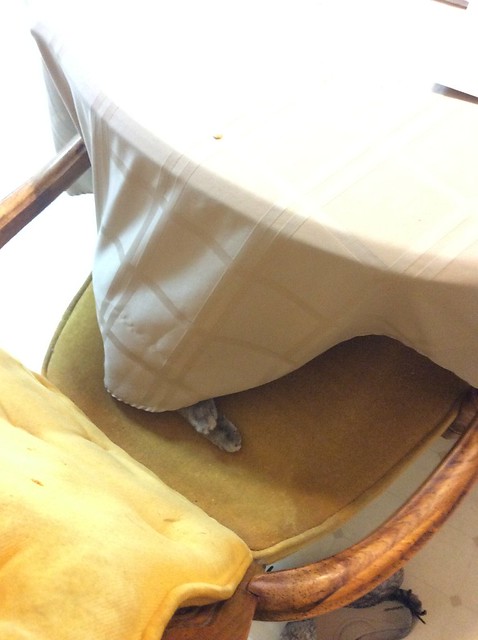 Our tablecloth is very ladylike, always demurely crossing its legs when in public.

So I was feeling good, just be-bopping along with my life and my writing, and then suddenly, the day after my previous post, our oldest kitty died. It happened in a way that was easy and gentle on all of us and…it still sucks. We got her a year after we were married, and she lived to be sixteen. She had a great life right up until the end, and even then she was OK. And…I really, really hate it that she’s not here anymore.

So that’s why I haven’t really had anything to say here for the last little while. I’ve been kind of quiet inside, adjusting to our new way of being around here. Plus, we spent the 4th of July weekend with our 18-month old niece, our 8-month old nephew, and our 3-year old nephew, and only now have I recovered enough to once again be able to form coherent sentences. Just so you know, all of you parents out there, I am in awe of your awesomeness, and how you do that all day, every day. You guys seriously rock.

Words have started coming back to me, so I imagine I’ll have some things to tell you about by and by. But for now, thanks so much for being here no matter what’s going on. You guys are the best.

I donâ€™t drink, but if I confess that I am occasionally tempted to start. Not because of the excruciating pain of my chronic illness, but because I spend all day alone with 3 cats.Â  Therefore, I have created the following fun drinking game based on the number of times in a day that have to say the same things over and over again to the cats.

1.Â Â  Â â€œWhy the hell are you trying to reason with cats? YOU ARE ALWAYS GOING TO LOSE. Do you WANT to have a drinking problem?â€Â  (YES/NO)

If NO, then proceed to a less painful activity, such as undergoing a root canal without the healing balm of Novocain, or watching a curling match on TV

If YES, then continue on to Question 2.

2.Â Â  Â Really? REALLY? Letâ€™s just go back and have another look at Question 1, shall we?

If still YES, then please complete the following short survey:

-How many hours did you sleep last night?
-What is your pain level?
-Are you sure youâ€™ve taken all your medications for today?
-Have you sent any texts to your husband that include the words â€œstabbingâ€, â€œsledgehammerâ€, or â€œrunning away from homeâ€?
-On a scale of 1-10, how important is it really that Bailey stop â€œlooking at me funnyâ€?

If still YES, well, then on your own head be it; proceed to Step 3.

3. â€œApparently you are delusional enough to think that you can actually get a cat to do what you want, so you might as well have a drink to ease the pain of your inevitable failure.â€

His skill at talking me down from the ledge when I interrupt him at the office with texts like,

“I’m 2 seconds away from going out to buy an icepickÂ  so I can stab myself repeatedly in the temple, because that would be less painful than DEALING WITH THIS CAT!!”

So the cats have been passing pink eye back and forth for the past couple of weeks which has been super-fun, because there’s nothing quite like risking life and limb to capture a cat and assault it with eye drops. Unless it’s getting to do it twice.

However, I believe that I am now fully qualified to be a chaperone at any middle school dance, because I’ve spent a huge chunk of the past two weeks yelling things like, “OK, guys, break it up,” “No touching, you two,” and, “HEY! GET AWAY FROM HER!”

I guess there really is a silver lining to every cloud.

Because of course, on the day when the pain is so bad that I can’t move my hands or bend over, the cats haveÂ  barfed out some dirty-picture-like graffiti in our front hallway. Thank goodness most of my friends live inside the computer.