So, Cymbalta withdrawal has been kicking me in the face for the last couple of weeks or so.

It’s very weird, and non-linear, and the experience reminds me of nothing so much as the creepy Hotel California:

I can check out anytime I like, but apparently I CAN NEVER LEAVE.

A couple of months ago in a moment of nutritional virtue I gave my husband custody of all the chocolate chips in the house and asked him to put them in the outdoor freezer.

Today, in a massive PMS craving that shook the foundations of our home I flung open the freezer door, BUT THEY WERE NOWHERE TO BE FOUND. I searched some of his previously used hiding spaces with no luck, and was walking to the phone to demand in my best kidnapper tones:

â€œWhere are the chocolate chips, Ryan?! Spill now, or the convertible gets it!â€

Then, in what was clearly the power of the Holy Spirit intervening to save my husbandâ€™s life, as I flung open the door to ransack the pantry I noticed the last few chocolate-covered protein bars (or, â€œcandy bars, rebrandedâ€, as my friend Lynne calls them) on the bottom shelf.

And yea, though we passed through The Valley Of The Shadow Of No Sugar, we were delivered.

Thanks be to God.

Because the skills I’ve honed in over a decade of being homebound have gone, overnight, from hardship to Superpower.

“[This is] my go-to breakfast whenever I have some ground pork or goat meat in the fridge.”

(Oh sure. I keep my goat meat right next to my narwhal patties and my unicorn links.)

“If you have ground venison, wild boar, or other game meat, try substituting it for the pork.”

(Right. I’ll make sure to bring some back the next time we visitÂ our summer cottageÂ in Sherwood Forest.) 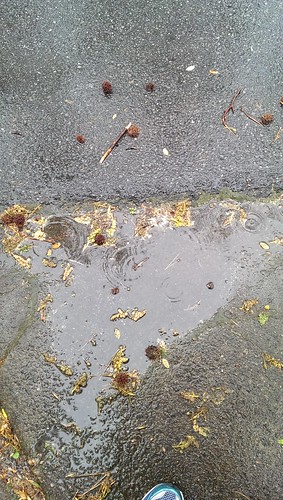 Lately I’ve been having a really hard time with the mood cycling that comes with my bi-polar disorder. The constant roller coaster of shifting emotions is exhausting, not to mention all the stories and dramatics my mind goes into as a result of all my internal spinning.

It takesÂ  constant, superhuman strength to stand within myself and remember that these are just thoughts and emotions, that just because they’re here doesn’t mean they’re true,Â  to remember that I’ve made it through this before and I can do it again, to trust that yes, this is here, and it sucks, and I’m going to be OK, all the while being bashed and buffeted and bruised and banged up and beaten by constant, unrelenting waves of pain.

It helps to get outside, even for a few minutes, so I can focus on something other than myself and my mind. And even though it’s kind of gloomy here today, I was surprised by unexpected beauty. May its peace and lovely grace continue to ripple through my soul today. 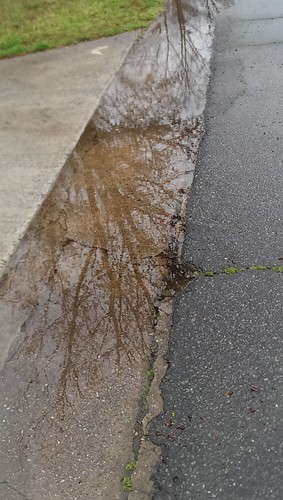 So I was at the dentist yesterday for a checkup and, not surprisingly, since it had been almost a year and a half since my last visit, the dentist informed me that I had some cavities.

He’d confirmed two of the suspect spots and was examining a third when he suddenly asked, “Do you smoke?”

“No,” I said, all my 40 years of Being A Good Girl rising up in horror that he might think such a thing of me.

“Oh, well this is just a really weird place to get a cavity.”

And now I am very afraid.

So I can’t remember what I’ve told you guys lately, on account of my body apparently felt that during the past 3 months of comprehensive and invasive medical procedures my teeth were being left out of things, and decided to take immediate action to remedy the situation.

Which meant that one day I bit down and Felt Something, and not in a good way. But I decided to just kind of take a “wait and see”, “I’m sure it’ll go away on its own” kind of approach, because that’s worked out so well for me in the past. And, you know, because when even the pain meds you’re on for your fibro aren’t helping your tooth pain, that’s definitely the time to take more of a passive approach to your dental health.

Luckily for me my husband had recently made us our 6-month dental check-up appointments, so it was only a couple (or maybe 6) weeks until the dentist got a look at it. At which point he told me that I had a fracture, and made me bite down on the bitey stick until it hurt really, REALLY badly, and then told me I needed to go see an endodontist. Preferably today. Or, ideally, yesterday, if I could possibly work that out.

So we showed up at the endodontist bright and early the next morning where I got to repeat the bitey stick exercise, AND have my lower teeth tapped AND have him touch my tooth with a swab, the tip of which was slathered with an icy, sub-zero cold that could only have come from The Blackest Reaches Of Hell, until it was REALLY F*ING HURTING. At which point he announced that I needed a root canal right that second.

I’ve had a root canal before and I was pretty sure that’s what was gonna happen, so while it was not the worst thing I’d even had to go through, it certainly wasn’t pleasant. So I had a few yucky days, and then there was just sweet, blessed relief for about a week and a half.

And then, 2 or 3 days before I was supposed to go back to the dentist to get a crown, I bit down and felt the bad thing again, and some more pain just WHOOSHED its way right back in. Which meant that after a lot of hemming and hawing, on the Tuesday before Thanksgiving we all decided that the tooth needed to come out.Â  Unfortunately the tooth never received the memo on this decision, and therefore was extremely committed to remaining attached to my head. E-X-T-R-E-M-E-L-Y committed.

But fast forward to today, a week later, and the day when my sutures were coming out. To celebrate, I went to the chiropractor to get adjusted, because after all that dental work my jaw was so out of joint that it could barely open. So I was explaining all of this to the doctor, and as he was adjusting me he asked if I was going to get a dental implant. To which I replied, “Not if I can help it.” Which then impelled him to explain why I really needed to get an implant, and how he has this great oral surgeon, and how the surgeon took really good care of him when he had his tooth extracted-same tooth as me, actually-and showed me how great it looks, and then, as part of his sales pitch (?) started describing the implant process to me.

He said, “So you know, when they get the tooth out, and there’s that hole there? Well he just reached over, and took a small piece of cow bone, and put it down in that hole, and…” and to tell you the truth, I just stopped listening after that, because, um, nooooooope. Plus, the conversation had started to violate my rule of listening to doctors giving me advice on medical problems that they do not, personally, treat in their own particular medical practice.

But then I was finally at the dentist, and I finally had my stitches out, and I was finally free to go, and as part of my celebration I informed him that I was immediately going to the Chick-Fil-A down the street, now that I was no longer under the ban on eating french fries and carbonated drinks (oh, hello, blessed french fries; once again I am cradled in your sweet embrace).

“Because it’s been a loooooong week,” I said.

“Oh, well that was only for the first day or two,” he replied.

“Well for the first few days I’m worried about things getting back there and poking that spot,” he explained seriously, “but then, then you…” and here he started to laugh, as he realized what he was getting ready to say, “then you can start…weaning yourself back onto junk food.”

I haven’t posted anything new for the past few days, because lately I just haven’t felt good.

I’ve been trying really hard to figure out how I can turn this into a funny story, but all of my brain space has been taken up by thinking about how badly I feel. If a little cartoon balloon appeared over me right now and let you see inside my head, it would just be filled with symbols like, “*!@*!!*^@&*” to disguise what I have actually been thinking.

It all started because I am currently in the middle of one of my “from-one-extreme-to-the-other” sleeping cycles. About three weeks ago, all I could do was sleep. I could not stay awake for more than a couple of hours. (Important Side Note: This is a perfect example of why I should not be allowed to watch shows like “House” on TV, because during this time I was absolutely convinced that I had African Sleeping Sickness, as opposed to, say, just being really tired from helping twelve people prepare for their final exam in Spanish.)

But now I have swung to the opposite end of the pendulum, and now I am always awake. I thought that maybe a new bedtime location might help ease my insomnia, so last week I tried sleeping on the couch to see if that was any better.

Um, not so much. All that did was painfully pull a muscle in my neck and cause me to walk around for the next three days with my head permanently turned to the left. That was fun, and not at all embarrassing.

In any event, I’ve had a lot of extra free time to fill up (due to the not sleeping), so I decided to spend some time outside in our garden.

Have you seen the “Simpsons” episode (Episode #284, “Blame It On Lisa”) where Lisa is sponsoring an orphan named Renaldo, and when the Simpsons go to Brazil to meet him they find him running down the street fleeing monkeys, because, as he explains it to them, “I am like candy to them [the monkeys]!”? Well, that is EXACTLY what happens to me when I go outside in the summer. Only with bugs, not monkeys.

My husband and I spent the weekend working in our yard, and today I look like I’m covered with some horribly disfiguring and highly contagious plague-like disease from Biblical times. Even my husband, who is a very calm, rational engineer rarely given to any kind of dramatic statement, looked at me this morning and said, “Oh, man!”

So if anyone needs me this week, I’ll be pretty easy to find. Just follow the hydrocortisone trail and the sounds of the TV to the living room, where I will be sitting, bolt upright and wide awake, surfing the channels to find the new, dramatic medical condition which features insomnia contracted from multiple mosquito bites.